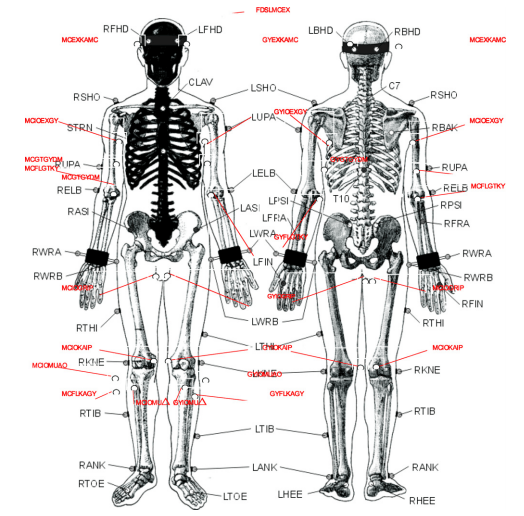 Studies from Sensorimotor Neuroscience Laboratory at McMaster University in Hamilton, Ontario, Canada show for the first time that hoopers utilize slightly different methods of invoking and sustaining our hula hooping oscillations. This means that all of us hula hoop just a little differently. View the study white paper here

During a biomechanical analysis of lower limb joint coordination during hula hooping, the team set up a lower extremity inverse dynamics model that incorporated kinematic input and force platform data that was developed to compute the angular velocities, moments about and powers produced at the lower extremity joints. Amazing, right? They discovered that abductor moments and powers proved to be really important in one’s ability to hoop and maintain hooping oscillations, something shown to be true in all three participants. However, further analysis of their hula hooping also showed that there were variables between all three of them in terms of involving the ﬂexor and extensor moments and powers of the ankle, knee and hip joints, variables that ultimately result in the adoption of varying hula hooping strategies by each of the three participants. View the study white paper here

Three women voluntarily participated in the experiment and all three were intermediate-level hula hoopers selected based on their ability to comfortably sustain the hoop in terms of speed, smoothness and stability. Their age range was 16 to 23 years and for the purpose of scientific simplicity, each participant used a standard edition Wham-o hula hoop. The participants were required to hula hoop at their self-selected pace for 20 seconds and data was collected once the participant expressed that they were hula hooping comfortably. Five 20 second trials were collected for each participant and these moments were recorded using a ﬁve-camera Vicon motion analysis system.

The results showed an average of the five sessions which were then normalized based on individual body mass per hooper to ensure that differences in body size were not a factor. What they learned was that all three participants move differently. Some utilized their leg joints more than others. Others demonstrated more power in their hip thrust. Some of us involve our ankles more, yes our ankles, to keep the hoop in rotation. For others the knee plays a stronger role – while for someone else it may remain rather motionless. When it comes to hooping most of us already know that we’re really pretty much pushing our hips at two points rather than in a circle, right?, But how many of us are aware that the front or positive motion may be significantly greater for one person while the negative (rear) motion which can be significantly higher for another?

With regard to Knee Hooping some people’s knee’s don’t really move much, if at all.. This research shows that just because some of us don’t involve our knees in the basics of hooping, doesn’t mean the same is true for others. These small facts may help explain why a few very active hoopers have developed a condition known as Hoopers Hip, while most have not. These subtleties may help explain why, when pretty much anyone can learn how to hoop in just a few minutes, there are the rare individuals that just don’t pick it up at all. Perhaps what works for one hooper, doesn’t work for another, meanning they need their own personal oscillation\ in the world.

Amber Sankowsky
2020-04-04T15:09:38+0000
Hello yes definitely recommend! fast service, well packaged and of course the absolutely beautiful hoops! Very well made to. 😀 I will definitely be shopping at Hula Hoops Australia in future Thank you Maria 💓 much love and blessings to you

Christie Lewis
2019-05-09T07:52:10+0000
Thank you so much. My gorgeous beginner hoop arrived in record time. I absolutely love it! I've started working my way through the online course and am loving the easy-to-follow instruction and relaxed, no-pressure vibe. In my head, I am already picking out the colours of my next hoop (why just have one?).

Joanna Lesley
2019-03-12T01:11:26+0000
If you’re wondering whether to buy a hula hoop from Maria then take my advice and DO IT!! Maria is a total sweetheart and her hoops are a work of art. I adore mine, I want ten more. It’s sparkly and pretty and sturdy and light and you definitely should purchase your hoop from her.

Anne Courtney Neil
2018-10-18T04:34:42+0000
Most incredible purchase! The colours and pattern it is like the ocean is swirling around while playing. This was a gift for my partners birthday and she absolutely adores her new hoop. Thanks so much you are a talented artist creating beauty that makes people smile. A.

Connie Cunningham
2017-07-04T12:02:22+0000
Maria make the most incredible travelling hoops, not only functional but absolutely beautiful and perfectly weighted. I recently travelled for 7 weeks overseas and whilst on tour, I assembled my hoop at each destination in just 60 seconds and was ready for my hooping workout, what a great way to keep fit whilst eating & drinking your way around europe, in fact I returned home 2kgs lighter, thanks Maria ��

Elisha Angel Lando
2017-06-08T00:51:41+0000
I bought my first 2 hoops from this shop and are super happy with the purchase! I have bought a couple more hoops since then but love my HoopsAlive hoops and use them all of the time! There was a shipping issue but it was sorted ASAP and all issues were resolved in a speedy and pleasant matter :)

Emma Smith
2017-06-07T07:21:19+0000
I purchased Maria's online hooping course and I found it so useful! Maria explains things in real detail, I'm so grateful to have more confidence in my hooping skills. Thank you!
%d bloggers like this: